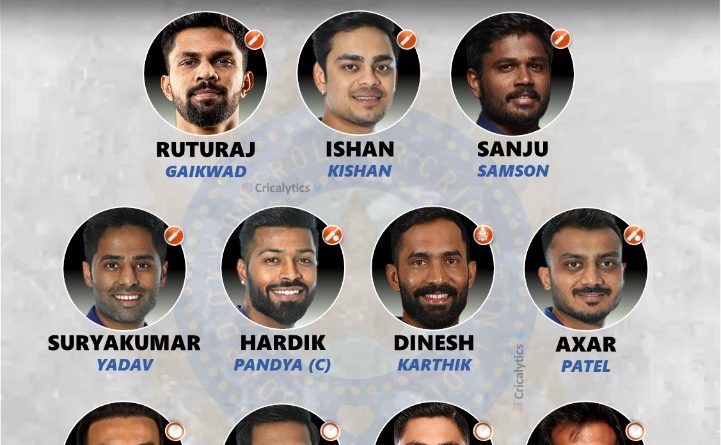 Hardik Pandya set to lead as we look at the best predicted playing 11 for Team India for the 2022 T20 series vs Ireland.

In what can be called an unfortunate scene of events, the India vs South Africa T20 series ended as 2-2 with the 5th match being washed out due to rain. It was a series of comeback for the Indian Team who were down 0-2 before levelling it to 2-2. Had India won, Rishabh Pant would have been the first Captain to win a home T20 series vs South Africa.

The Indian T20 team now moves to Ireland where they will be playing the 2-match T20 series. An almost identical team shall be playing the series with 3 new names added to the squad for injured KL Rahul and the duo of Rishabh Pant and Shreyas Iyer, who shall be busy for the one-off Test match vs England. Apart from Pant and Iyer, a lot of senior players would be busy preparing for the one-off Test match vs England.

With so many players being rested, the T20 series shall see a few new players getting an opportunity to impress. Among the important ones that is making a comeback include Suryakumar Yadav. Surya is one of the most important members of the T20 squad, and his return is a blessing for the Indian Team. Along with him, all eyes will also be on Sanju Samson and debutant Rahul Tripathi.

So, with just a week to go for the next series, let’s look at the best predicted playing 11 for Team India for the 2022 T20 series vs  Ireland. Meanwhile, According to the leading website, Betway, India have better winning odds as compared to Ireland with the value set at 1.07 for the 1st match.

The duo of Ruturaj Gaikwad and Ishan Kishan played all 5 matches in the recent T20 series vs South Africa. With 2 matches scheduled to be taking place vs Ireland in Ireland, it is safe to assume that the duo shall continue as the openers against a slightly lower-ranked team. If not for both the matches, these two should play the first match; at the least.

One may argue that Ruturaj Gaikwad has been given enough opportunities, but he threw his wicket away in 4 of the 5 matches, and In his place, Rahul Tripathi should be given an opportunity. But Gaikwad may have not had a good series, but against a minnow like Ireland, he can regain his confidence. No point for Tripathi to come in now and score against Ireland. Instead, he should wait for his turn to come.

With Shreyas Iyer and Rishabh Pant unavailable for the T20 series vs Ireland due to Test series commitment for England tour, both these places shall be up for grab. Looking at the available options, we have Sanju Samson, Rahul Tripathi, Suryakumar Yadav, and Deepak Hooda.

From these 4, Suryakumar Yadav shall definitely play at number 4. Not only is Surya one of the consistent performers for Team India but he is also one of the confirmed names when it comes to Team India’s best playing 11 for T20Is. For the second middle-order slot, Team India can look at either Deepak Hooda or Sanju Samson given that Rahul Tripathi is considered for the opener position.

This would be interesting as it would depend upon the role Team India is expecting in the middle-order. If Team India play Suryakumar Yadav at number 3, Hardik Pandya at 4 and Deepak Hooda at 5 could be a good batting-order. But given that Surya and Deepak’s role is more of a lower middle-order batter, Sanju Samson at 3, Suryakumar Yadav at 4 and Hardik Pandya at 5 seem more apt with T20 World Cup 22 in sight.

Coming to the finishers, the duo of Hardik Pandya and Dinesh Karthik, that also played the same role against South Africa should continue doing it. Dinesh Karthik’s current form has actually opened up a good idea of him playing as a finisher; something that MS Dhoni had done a lot during his prime.

Ideally, Ireland’s pitches won’t assist spin more, but Ireland as a team may not be too comfortable facing spin. We had seen this in Team India’s last tour to Ireland in 2018 where Yuzvendra Chahal was awarded the player of the series. With this in mind, All-rounder Axar and primary spinner Yuzvendra Chahal should be the main spinners of the playing 11.

Coming to the pacers, India would like to stick to the same pace trio of Bhuvi, Harshal, and Avesh; at least for the first T20I. All three pacers did extremely well in the South Africa series, and playing against a minnow team like Ireland will give them more confidence and better returns.  So, expect the team to play the same trio for the first match; at the least.

So, that completes the best predicted playing 11 for Team India for the T20 series vs Ireland. Interestingly, India may also take a completely different approach by resting the players that played against South Africa. This way they could be giving an opportunity to players who couldn’t play against South Africa. So, the likes of Rahul Tripathi, Umran Malik, Arshdeep Singh, Deepak Hooda, and Venkatesh Iyer may be given an opportunity first.

Meanwhile, here’s the schedule for India vs Ireland 2022 T20 Series:

Thanks for reading! What’s your playing 11 for Team India for the 2022 T20 series vs Ireland? Please email your comments to business@cricalytics.com