KXIP vs CSK IPL 2020: Kings XI Punjab take on Chennai Super Kings as we look at the Preview, predicted 11 and key players.

It is the clash of the bottom-ranked teams as Kings XI Punjab take on Chennai Super Kings in the second double-header on Sunday. Both the teams have won a game each, and have lost three. However, looking at the outset, KXIP have been a better team with a close finish in all the matches.

KXIP haven’t played bad cricket all. The best performing 11 from the first two weeks feature 3 players from KXIP team in the form of KL Rahul, Mayank Agarwal, and Mohammed Shami. Moreover, the purple, as well as the Orange cap (before DC game), belong to them. It is only a few baffling decisions on the field that has cost them at least 2 matches.

Chennai Super Kings have now lost three matches in a row. They are going through a phase which they have experienced only in 2009 and 2014  where they lost there in a row. Coincidently, 2009, as well as 2014, was conducted outside India. However, they went on to qualify for play-offs in both the years. So, never write them off even in your wildest of dreams.

Kings XI Punjab definitely need a change in batting-order as well as the team. Karun Nair and Maxwell haven’t fired at all. In fact, it is surprising to see Glenn Maxwell struggling to even get bat on the ball. While Karun Nair should definitely be benched, Glenn Maxwell can get away with another chance to get back his form.

James Neesham too hasn’t done anything substantial in the squad as yet. Instead of James Neesham, the team management should bring in a better death-overs bowler, Chris Jordan or Hardus Viljoen. Nevertheless, expect KXIP to do at the least three changes in the squad.

Chennai Super Kings are lacking a wicket-taker in the middle-overs, and the lack of form of Chawla and Jadeja has hurt them a lot. The team is relying heavily on Watson to fire in the absence of Suresh Raina, but he has failed to deliver it as yet. They need to bring-in Imran Tahir, but the lack of balance may hurt them once again. They can still bring-in Tahir, but that would be at the expense of Bravo or Curran. But, would CSK do that?

KL Rahul looked dejected with the way he got out in the last match against MI. With Maxi out of form, KXIP badly need their skipper to perform. He has played mature cricket so far in the Tournament, so expect the Captain to take up the responsibility, and play a good knock against the CSK.

After playing a match-winning knock in the first match, Injury ruled Ambati Rayudu out of the next two matches. While his last knock was slightly below-par, he is a quality player, so, expect him to make a good comeback. Moreover, the lack of runs from Watson should prompt Rayudu to play with more maturity.

Every year CSK have got a foreign batsman who performs for the team the entire year. In previous years, it was Matthew Hayden, Michael Hussey, Dwayne Smith, etc. This year it seems to be Faf du Plessis. He has looked confident so far, and if you aren’t selecting him, you are missing out on a lot of valuable points.

Can you imagine, the fifty struck by Ravindra Jadeja in the last match was his first in his 13 years journey of IPL journey. He has primarily been a bowling all-rounder, but this season, Jadeja, the bowler hasn’t had much to do. However, given the number of right-handers in the KXIP squad, Jadeja would have a good role to play tomorrow.

Mohammed Shami is in the form of his life currently in. He is bowling in the right channels, and the pitch is assisting him to take a lot of wickets. He has 8 wickets so far from 4 matches, and these numbers are only going to get better. However, the only thing which he needs to do is to improve his death-overs bowling.

Deepak Chahar’s performance is improving match-on-match, and he is almost in line to repeat his superb IPL 2019 performance. Swing is his potent weapon, and luckily he is able to do it with ease. Luckily, the pitch in Dubai should assist him a lot, and be the lethal bowler he is.

Sheldon Cottrell has been bowling superbly with the new ball so far. He is pitching the balls in right areas, and that has resulted in him getting a lot of assistance from the pitch. His role would once again be crucial in the powerplay. Moreover, as he mentioned post last match it is the death bowling that he wants to contribute for his team more.

Thanks for reading! Who do you think would win the match between KXIP and CSK? Please, let us know in the comments. 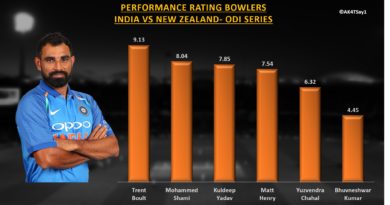 India vs NZ 2019: Trent Boult, the stand-out performer as we look at